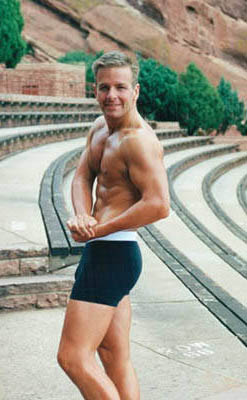 You can recover mostly from trashing yourself skiing. Or at least after taking down a few pin up calendars from the wall; but sometimes things just keep coming back once you’re to that place called Damage. The human shoulder, for example, is the one joint in the body that moves the most. It is mandatory that it be flexible enough to handle the wide range of motion required of it. The compromise price we pay is the large number of problems not faced by other joints such as the hip (that just blows out and requires replacement later on down the road).

A little more than a decade after the mountain shook me loose and a decade before my hands went partially numb (what?…later), I worked at a sports supplement company. It was the company in the industry at the time and known as the gold standard of product lines that could pump you up, boost your athletic abilities, make you stronger, make you more powerful, smarter and better looking Well, ok, maybe not those last two but a lot of people thought that; and there were a lot of pretty good looking people milling around. I wasn’t one of them but they were there. It was the closest thing to a cult I had ever been exposed to and you could find plenty of people drinking the cool-aide in the building. As far as cults go the company had quite a distance to go before dying a fiery death as the sheriffs bare down on them with armored personnel carriers, but there were most definitely some pretty rabid fans and employees. There were people who would actually travel to the building from all over the country just to have their picture taken in front of the sign out front. The sign. Really! “I seen ’em do it!”

The result of this popularity was a cash flow that was like drinking from a fire hose, and one (of many) results of that was a state of the art gym with everything you’d need to achieve one or all of the above physical improvements. It was not a big leap to understand that if you got enough testosterone in that gym, grunts, shouts, screams and the gnashing of teeth would soon follow as the volume of Sports Center got turned up and the heat was on to “go big or go home”. Sheesh, it was a little much sometimes. When the CEO is a well known body builder, that just kinda goes with the deal, I guess.

It was usually the case in the mornings when my friend, Jeff, and I would go for our morning workout. He’d spot me, I’d spot him and it all worked out pretty well. The big boys around us would be doing their thing, busting out the reps with three 45s on each side…call me a sissy, but I was never going to get there and I could live with that. I got to looking like that silly fellow in his underwear at the top of the page (very silly!! But you should have seen the before…eeek…that wasn’t silly, that was just scary.) Feeling fit is a good thing. Being fit is even better. I was not as satisfied as I would have liked back then, but, of course, at that time being as satisfied as I wanted to be would have required dabbling in nutrients of an injectable nature which, thankfully, I did not pursue. Ah, to be relatively young, still mostly bullet proof and thinking stupid thoughts.

I don’t know if it was the heavy weight, improper form or just physiology, but my left shoulder started to go. First, it was just sore, then it grew to be really sore, and then it was painful enough to prevent any kind of heavy lifting or really much of anything day to day with the exception of typing software code. That was OK (as least I could keep my job), but the residual effect was being unable to lift my arm above head height and every once in a while finding an ice pick had been driven into it from the top.

So now, 10 years later and with much learning having been gained, I lament the beatings Jeff and I used to visit upon our bodies. The dips that went too far down so we could get that “extra burn”, the one last rep of the military press beyond what we were really capable of and all the other things I did to make sure the most flexible joint in my body remained out of balance and pain remained just on the other side of the door marked “just one more”.

The net result of that and all my exploits using my arms- like way back in the days in Alexandria, Virginia, I remember wanting to get that softball to home plate from the outfield. Not just get it there, but get it straight there, no bounce. That was an exercise in checking how far my left shoulder joint would go before it popped out. And it hurt like hell!- and every once in a while my shoulder will turn to me and make sure I understand that I am not the boss of it and if there is any question, there might need to be a reinforcement class next time I decide I want to lift an eight by eight pressure treated timber on to it.

We are never really in complete control, are we?